Sometimes when we see the Divinity of God touch our mere, mortal humanity, there are fireworks that go off in our minds and our hearts that leave us almost helpless to know, just how to respond . . .

But our Scriptures remind us today, that we should never forget to turn back to where it all happened, and give Thanks to God, because what actually happens inside of us, whether we realize it or not, is a Conversion. 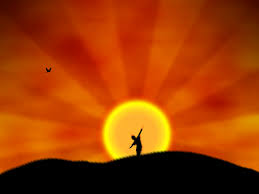 And if we keep our hearts and minds open to Listening, we’ll find that Conversion happening to us every day of our lives.

Today we heard two powerful examples of souls touched by the Divine.  And we see their perfect responses of thanksgiving.

We note, too, that in both the stories of Naaman the Syrian and the Samaritan Leper, both men were not only foreigners to the Jews, but they were their enemies as well.

So we see, that this Divine Touch is never restricted to any race, creed, culture, or level of holiness.  It can even happen to us sinners.  And as a matter of fact, it actually has, through our Baptisms.

Now the story of Naaman is one of my favorite illustrations of how our Sacrament of Baptism was prefigured in the Old Testament.

Through that story, we not only see the healing and conversion of an an army commander who routinely routed the Israelites and took their children as slaves, but we see an incredible picture of Grace.

Grace is that Gift of undeserved favor that touches our mere mortal humanity with the glory of God’s Divinity . . .

For you see, while Naaman was suffering and dying with the painful affliction of leprosy, he was offered an odd treatment for healing through the very mouth of a little Jewish child, that HE had made a slave.  It was a true gift of Grace, an undeserved favor.

But now Naaman was faced with a tough decision.  Does he ask his boss, the king, to grant him leave to return to the country that HE had plundered, to risk his life and to ask THEM the favor of this far-fetched miraculous healing?  Or does he just ignore the whole thing and suffer the consequences of his horrific illness.

Naaman was very skeptical.  And at one point, he almost gave up on the whole thing because of his pride.  It was Satan’s last try.

Well, we heard the end of the story in our first reading.  Naaman obediently plunged himself in the water, as Elisha had instructed, and he was completely cleansed.  He was Baptized, and he was Saved.  And he could have, then, just run home like the other nine lepers in the Gospel.

Something happened to Naaman that so far exceeded the simple cleansing of his skin, that walking on water, or even flying in the air would have paled in comparison to the intense Gratitude and the Conversion that Naaman experienced.  All Naaman could think of, was “How does he repay that kind of miracle?”

And yet, Grace does not allow repayment, at least in mortal, material terms.

Naaman’s repayment for God’s gift was his very life itself.  And Naaman acknowledged that payment by pledging his fidelity, his faith to God forever.

Today we hear the Four Steps to Conversion.

The first step is Hearing and Listening.  And there is a definite difference between the two, as most spouses will attest.

Next, is a conscious decision to Go and Ask, which we saw both Naaman and the ten lepers of the Gospel do.  If we don’t go and ask, we may never get the answer.

Third, we respond by Obeying and Doing what is asked of us.  And it may be as silly as just walking away or as awkward as jumping up and down in some water.

And the last step is Giving Thanks!  It’s a habit that we should all be fully accustomed to:  for every sin we avoid, for every friend we greet, with every Eucharistic celebration we are invited to, for every breath we take,

And in that gratitude, we find God’s Grace.
We are TOUCHED by the Divine!

Scripture Readings for the Mass of 10-09-16
Twenty-eighth Sunday of Ordinary Time, C

Naaman went down and plunged into the Jordan seven times at the word of Elisha, the man of God. His flesh became again like the flesh of a little child, and he was clean of his leprosy.

Naaman returned with his whole retinue to the man of God. On his arrival he stood before Elisha and said, “Now I know that there is no God in all the earth, except in Israel. Please accept a gift from your servant.”

Elisha replied, “As the LORD lives whom I serve, I will not take it;” and despite Naaman’s urging, he still refused.  Naaman said: “If you will not accept, please let me, your servant, have two mule-loads of earth, for I will no longer offer holocaust or sacrifice to any other god except to the LORD.”

Sing to the LORD a new song, for he has done wondrous deeds; his right hand has won victory for him, his holy arm.

The LORD has made his salvation known: in the sight of the nations he has revealed his justice. He has remembered his kindness and his faithfulness toward the house of Israel.

All the ends of the earth have seen the salvation by our God. Sing joyfully to the LORD, all you lands: break into song; sing praise.

Beloved: Remember Jesus Christ, raised from the dead, a descendant of David: such is my gospel, for which I am suffering, even to the point of chains, like a criminal.  But the word of God is not chained. Therefore, I bear with everything for the sake of those who are chosen, so that they too may obtain the salvation that is in Christ Jesus, together with eternal glory.

This saying is trustworthy: If we have died with him we shall also live with him; if we persevere we shall also reign with him. But if we deny him he will deny us.  If we are unfaithful he remains faithful, for he cannot deny himself.

As Jesus continued his journey to Jerusalem, he traveled through Samaria and Galilee. As he was entering a village, ten lepers met him.  They stood at a distance from him and raised their voices, saying, “Jesus, Master! Have pity on us!” And when he saw them, he said, “Go show yourselves to the priests.”

As they were going they were cleansed. And one of them, realizing he had been healed, returned, glorifying God in a loud voice; and he fell at the feet of Jesus and thanked him. He was a Samaritan.

Jesus said in reply, “Ten were cleansed, were they not? Where are the other nine? Has none but this foreigner returned to give thanks to God?” Then he said to him, “Stand up and go; your faith has saved you.”