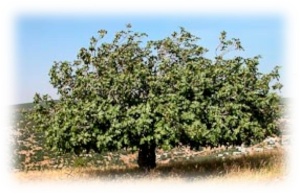 From today’s readings we might be wondering, “What do Moses, the Corinthian Christians, some Galileans who died at Pilate’s hands, eighteen people who died in a construction accident and a fig tree all have in common?”
.

St. Paul summed it up nicely by saying,
“Whoever thinks he’s standing secure should take care not to fall.“
Or, as the Boy Scouts would say, “Be prepared.” 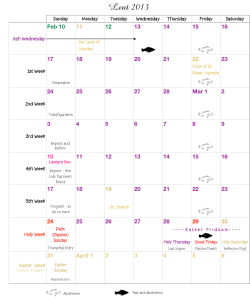 Here we are, beginning our third week of Lent already, and now is the time we should be asking ourselves,

“Are we any better, any stronger, any healthier, any thinner or any holier than we were two and a half weeks ago, on Ash Wednesday?”

Are we any more prepared for that big surprise?  Would we be ready to meet God face-to-face?

Or have we been procrastinating?
.

You see, Moses, as a fugitive murderer, was sitting pretty there in the desert, hidden from his Egyptian accusers, and living with a wife, a child and six sister-in-laws.  Who would have ever suspected that out of the blue, he’d run into God, face-to-face?

And what did God want? 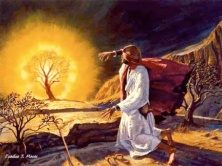 Well, of course, God wanted him to go back to Egypt.  Funny, God never said a word about the murder, about running away instead of standing up for his people, about hiding in his comfy little outpost.  God just said, “GO!”

But, boy did Moses squirm! You never heard so many excuses.  He prodded, “But who do I say sent me?”  He pleaded, “But what if they don’t believe me?”  He protested, “But I’m not really a very good speaker!”  And finally, he just outright asked God to send someone else.

You see, Moses knew what was in store for him back in Egypt.  He knew that neither the Egyptians nor his own people ever wanted to see him again.  It truly was a death sentence. . . so Moses thought. 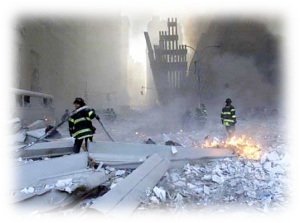 And yet, we never know, when that tower just might fall upon us.

We never know when the evil of the world will come knocking at our door, or when the ‘Master Accountant’ will ask us about the fruit of our lives.

“Be prepared,” the Scout would say.  “Repent,” says Jesus.

If we think we’re here, standing pretty . . . we go to mass, we give to the poor, we say some prayers, we’re pretty holy!  Then maybe it’s time to look up again at that tower.  Maybe it’s time to put out some more ‘fruit’ and prune off some ‘dead branches.’

Maybe it’s time to scrutinize the deepest recesses of our hearts.

What more can I do, what more needs forgiveness?

Because, there will be a time when all the chances are gone, and the axe will come out, and God will either say, “Go” or “Come.” 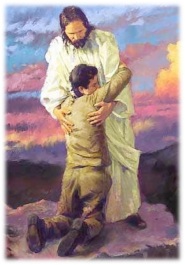 If we allow Jesus into our hearts and
into our lives, beloved;
if we repent,
never to return to those past mistakes again;
and if we continue growing in fruitfulness,
we may not be ‘standing secure,‘ as St. Paul phrases it,
but we will certainly ‘be prepared.’

And we’ll know that our ‘secure‘ Jesus
will be there ‘standing up‘ for us,
as He always has and always will!

Scripture Readings for the Mass of 03-03-13
Third Sunday of Lent, C

Moses was tending the flock of his father-in-law Jethro, the priest of Midian.  Leading the flock across the desert, he came to Horeb, the mountain of God. There an angel of the LORD appeared to Moses in fire flaming out of a bush. As he looked on, he was surprised to see that the bush, though on fire, was not consumed. So Moses decided, “I must go over to look at this remarkable sight, and see why the bush is not burned.”

When the LORD saw him coming over to look at it more closely, God called out to him from the bush, Moses! Moses!” He answered, “Here I am.” God said, “Come no nearer! Remove the sandals from your feet,  for the place where you stand is holy ground. I am the God of your fathers, “ he continued, “the God of Abraham, the God of Isaac, the God of Jacob.” Moses hid his face, for he was afraid to look at God. But the LORD said, “I have witnessed the affliction of my people in Egypt and have heard their cry of complaint against their slave drivers, so I know well what they are suffering. Therefore I have come down to rescue them from the hands of the Egyptians and lead them out of that land into a good and spacious land, a land flowing with milk and honey.”

Moses said to God, “But when I go to the Israelites and say to them, ‘The God of your fathers has sent me to you,’ if they ask me, ‘What is his name?’ what am I to tell them?” God replied, “I am who am.” Then he added, “This is what you shall tell the Israelites: I AM sent me to you.”

God spoke further to Moses, “Thus shall you say to the Israelites: The LORD, the God of your fathers, the God of Abraham, the God of Isaac, the God of Jacob, has sent me to you. “This is my name forever; thus am I to be remembered through all generations.”

R. The Lord is kind and merciful.
Bless the LORD, O my soul; and all my being, bless his holy name. Bless the LORD, O my soul, and forget not all his benefits.
R.
He pardons all your iniquities, heals all your ills, He redeems your life from destruction, crowns you with kindness and compassion.
R.
The LORD secures justice and the rights of all the oppressed. He has made known his ways to Moses, and his deeds to the children of Israel.
R.
Merciful and gracious is the LORD, slow to anger and abounding in kindness. For as the heavens are high above the earth, so surpassing is his kindness toward those who fear him.
R.

I do not want you to be unaware, brothers and sisters, that our ancestors were all under the cloud and all passed through the sea, and all of them were baptized into Moses in the cloud and in the sea. All ate the same spiritual food,  and all drank the same spiritual drink, for they drank from a spiritual rock that followed them, and the rock was the Christ. Yet God was not pleased with most of them, for they were struck down in the desert.

These things happened as examples for us, so that we might not desire evil things, as they did. Do not grumble as some of them did, and suffered death by the destroyer. These things happened to them as an example, and they have been written down as a warning to us, upon whom the end of the ages has come. Therefore, whoever thinks he is standing secure should take care not to fall.

And he told them this parable: “There once was a person who had a fig tree planted in his orchard, and when he came in search of fruit on it but found none, he said to the gardener, ‘For three years now I have come in search of fruit on this fig tree but have found none. So cut it down. Why should it exhaust the soil?’ He said to him in reply, ‘Sir, leave it for this year also, and I shall cultivate the ground around it and fertilize it; it may bear fruit in the future. If not you can cut it down.’”