Jesus didn’t come to heal all of our ills, or to calm all of the storms in life.  But He did come to teach us how.  He came to preach a Message of Hope.

Today we hear about three kinds of illnesses.  We’ll call them the
‘A-B-C diseases’.  These are sicknesses of Attitude, Being and Character.

In our first reading we heard about a man named Job, who was inflicted with the first two of these sicknesses.  He had a serious bout of ‘Attitude’.  It was a broken-hearted attitude of hopelessness.

Now, if we know anything about Job, we might say that he had every right to that attitude, because, he had just lost all of his flocks and shepherds, all of his herds and farmers; he lost all of his camels and drivers, and all ten of his children were killed in a windstorm.  Can you imagine the intensity of that much disaster, all at one time? 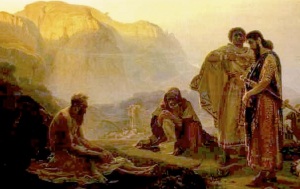 And on top of that, Job also suffered from that second disease, the sickness of Being, for he was covered from head to toe with painful sores.  So, Job moaned in both mental and physical anguish, over his demise.  He saw no light at the end of his ‘tunnel of doom’.  You see, Jesus had not yet come to teach Job about “Eternal Life”.  For Job, death was the ultimate END of everything.  And he prayed for death, because for him, there was nothing left to live for.

And yet, Job did not suffer from that third disease, the disease of Character, because Job’s character was strong!  He brought up his children to love and to respect God and others.  He constantly gave thanks to God for every little thing he had.  He was a man of Integrity.  And yet, now in his anguish, Job prayed that God would reveal – a reason for his suffering, or else put an end to his agony.

Do we ever get so wrapped up in the “A”, the Attitude, the mental anguish of the circumstances in life, that it actually causes us to have the “B” illnesses?  The sicknesses of Being, from hives, to fever, to broken hearts, to nervous breakdowns?

You see, all of those sick people were coming to Jesus for a ‘quick fix’.  They didn’t want to hear, they didn’t want to understand the Message that Jesus came to preach.  The Message, that it’s LOVE that heals.  And Love comes through a ‘compassionate touch’.  It comes through our ‘caring empathy’ for people in distress.  And sometimes, love’s healing comes simply, just through our ‘silent presence’.

Not even Simon and Jesus’ closest apostles understood that Message yet.  They were still struggling with that C-disease themselves.  Simon had the Character illness of ‘impetuousness’.  I often call it the “Hurry disease,” and sometimes even fight with it myself.  His life was in constant ‘panic mode’.  “Come quick, Jesus, everyone is looking for you – and I don’t know what to do.”

And in-between Jesus’ words of response, we can hear His Message again:  “It’s OK, Simon.  Calm – down, Simon.  Everything – will – be – alright.”  And another demon bites the dust.

It’s OK, Job.  Your Character has saved you.  For I, your God, am in control.  And you will be blessed beyond what you can even imagine.

It’s OK, Paul.  Just keep on preaching.  Because through your words, I, Jesus, will plant my eternal and permanent Message of Love – in their very souls.  And here we are, 2000 years later, still reading those words.

It’s OK, brothers and sisters of Jesus.  For you see, we are ONE, all together in His Love.  We are united in this Eucharistic banquet – BY His Body and Blood, BY His Soul and Divinity.  And with Him, and through Him, we can overcome ALL the A-B-Cs of this world:  with new –
Attitudes – of Hopefulness, with
Beings – of Compassion and Understanding and with
Characters – of Integrity, Patience and Peace,
all in the Love of Christ Jesus, our Lord.

First Reading:  Jb 7:1-4, 6-7
Job spoke, saying: Is not man’s life on earth a drudgery?  Are not his days those of hirelings?  He is a slave who longs for the shade, a hireling who waits for his wages.
So I have been assigned months of misery, and troubled nights have been allotted to me.  If in bed I say, “When shall I arise?” then the night drags on; I am filled with restlessness until the dawn.  My days are swifter than a weaver’s shuttle; they come to an end without hope.  Remember that my life is like the wind; I shall not see happiness again.

R. Praise the Lord, who heals the brokenhearted.
Praise the LORD, for he is good; sing praise to our God, for he is gracious; it is fitting to praise him.  The LORD rebuilds Jerusalem; the dispersed of Israel he gathers.
R.
He heals the brokenhearted and binds up their wounds. He tells the number of the stars;
he calls each by name.
R.
Great is our Lord and mighty in power; to his wisdom there is no limit.  The LORD sustains the lowly; the wicked he casts to the ground.
R.

Brothers and sisters:  If I preach the gospel, this is no reason for me to boast, for an obligation has been imposed on me, and woe to me if I do not preach it!  If I do so willingly, I have a recompense, but if unwillingly, then I have been entrusted with a stewardship.  What then is my recompense?  That, when I preach, I offer the gospel free of charge so as not to make full use of my right in the gospel.
Although I am free in regard to all, I have made myself a slave to all so as to win over as many as possible.  To the weak I became weak, to win over the weak.  I have become all things to all, to save at least some.  All this I do for the sake of the gospel, so that I too may have a share in it.

On leaving the synagogue Jesus entered the house of Simon and Andrew with James and John.  Simon’s mother-in-law lay sick with a fever.  They immediately told him about her.  He approached, grasped her hand, and helped her up.  Then the fever left her and she waited on them.
When it was evening, after sunset,they brought to him all who were ill or possessed by demons.  The whole town was gathered at the door.  He cured many who were sick with various diseases, and he drove out many demons, not permitting them to speak because they knew him.
Rising very early before dawn, he left and went off to a deserted place, where he prayed.
Simon and those who were with him pursued him and on finding him said, “Everyone is looking for you.”  He told them, “Let us go on to the nearby villages that I may preach there also.  For this purpose have I come.”  So he went into their synagogues, preaching and driving out demons throughout the whole of Galilee.