He was in the beginning with God.

All things came to be through him,
and without him nothing came to be.

What came to be through him was life,
and this life was the light of the human race;

the light shines in the darkness,
and the darkness has not overcome it.
(Jn 1:1-5 – Link to Scriptures)

And God created a PLACE for this NEW LIFE to exist.
And it was MAGNIFICENT, in its beauty,
in its order and in its “Complementarity.”
Everything worked together for the “Common Good.”

And it was ALL – VERY GOOD! 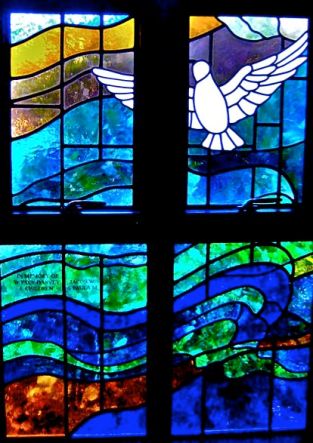 In the beginning, when God created the heavens and the earth, the earth was a formless wasteland, and darkness covered the abyss, while a mighty wind swept over the waters.  Gn 1:1-2

In the lower portion of the very first window is seen the water of God’s Creation.  And hovering above the water was LIFE.  Depicted as a dove, she was the Holy Spirit.  For it is the Holy Spirit who brings life to all.

She was the “mighty wind” we see breathing life into God’s first man, Adam.  She was the mighty wind blowing through the room of apostles at Pentecost.  She is the Spirit of God who breathes new life into every one of us at our Baptisms and strengthens us through the sacrament of Confirmation.

Then God said, “Let there be light,” and there was light.

God saw how good the light was.

Then God said, “Let there be a dome in the middle of the waters, to separate one body of water from the other.”

And so it happened: God made the dome, and it separated the water above the dome from the water below it.  God called the dome “the sky.”  Gn 1:6-7

It was truly a MASTERPIECE from every visible direction.

Up in the sky were colors and lights, blue and white, orange and violet, and brightness and darkness, and movement and stillness.

Down on the ground was soft and hard, brown and green and everything in-between.

And then there was the sea.  As blue as the sky or as black as the night.  It was the most awesome sight!

It was all perfect, almost.
All that was left was the LIFE.

Life as diverse as the imagination could invent.

Life to fill the sky and plumb the depths of the sea.

Life that could sustain itself and grow and multiply
and care – and Love!

Then God said, “Let the water under the sky be gathered into a single basin, so that the dry land may appear.”

And so it happened: the water under the sky was gathered into its basin, and the dry land appeared.  God called the dry land “the earth,” and the basin of water he called “the sea.” 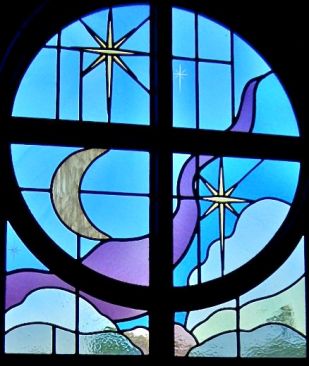 God set them in the dome of the sky, to shed light upon the earth, to govern the day and the night, and to separate the light from the darkness.

Then God said, “Let the water teem with an abundance of living creatures, and on the earth let birds fly beneath the dome of the sky.”  Gn 1:20

God saw how good it was,
and God blessed them, saying, “be fertile, multiply, and fill the water of the seas; and let the birds multiply on the earth.” Gn 1:21-22

The Creeping things with dirt to burrow in.

The Flying things with trees to nest in.

The Roaring things with forests to roam in.

All created for HARMONY!

In a world built just for them.

With clean air to breath, water to drink and food for nourishment. 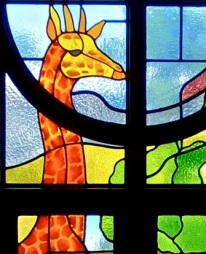 Then God said,
“Let the earth bring forth
all kinds of living creatures:
cattle, creeping things, and
wild animals of all kinds.” Gn 1:24

The Rest of the Creation Story

Then God said: “Let us make man in our image, after our likeness.  Let them have dominion over the fish of the sea, the birds of the air, and the cattle, and over all the wild animals and all the creatures on the ground.”

God created man in his image;
in the divine image he created him;
male and female he created them.

God blessed them, saying to them: “Be fertile and multiply; fill the earth and subdue it. Gn 1:24-28

And so it happened.
God looked at everything he had made,
and he found it very good.
Gn 1:30-31

Between the The Creation Triplet Windows and the second set of windows, The Abraham Triplet, one must pass through the “Cry Room” and then travel past the Baptismal Water Font.  If you’re following our journey through the Bible, you will also notice some Sorrowful and some Joyful events which occurred between the Magnificence of Creation and the Calling of Abram.

It is particularly these events that shaped the future of the world as we know it.

Characterized by wrong choices, humanity’s journey through life seemed to become one big saga of pain, suffering and death.  While their hearts longed for reunion with God, their minds insisted on independence.  And that independence stole the very freedom they sought.  For they simply became slaves to ignorance and greed.  These were times filled with sorrow and crying.

Yet, even as we exit that “Cry Room”, we still find that every once in a great while, there were those who listened, those who submitted to God’s will over their own and discovered in the process, true JOY.  There were Seth (the redeemer) and Enoch (the immortal).  And then there was a very common man by the name of Noah, who was attributed to having saved all of humanity through his faith and obedience.  Through the waters of a “Baptismal” flood, Noah emerged carrying the seeds of a new creation.

Unfortunately, somewhere in the mix there were some weeds.  And as mankind continued to fall over and over again, the light of new hope would next shine through the faithfulness of a man named Abram . . .