“Blessed are those who have not seen and have believed.”  Here we have the true definition of faith.  It’s funny how we tend to pick on the apostle Thomas for not believing in the resurrection, without seeing Jesus himself.  And yet, the faith of the other apostles was no greater.  Having heard Mary Magdalene’s story, Peter and John had to run to the tomb to see for themselves.  And when the two disciples returned from Emmaus, after walking and eating with Jesus, the other apostles didn’t believe them either (Mk 16:9-13).  It was only when they saw Jesus themselves, that any of the apostles truly believed in His resurrection, as many times as he explained it to them before His crucifixion.

You see, skepticism can sometimes be a detrimental part of our human nature.  We think it’ll protect us from danger or keep us from embarrassment.  It’s that old “pride” thing again.  “If I don’t protect me, if I don’t save myself, nobody else will.”  Or will they?  Or will He?

Do we truly believe that Jesus died to save us?  And that he saves us over and over again, from ourselves?  St. Peter said, “The goal of our FAITH is the salvation of our souls.”  And St. John said, “… through this BELIEF, we may have Life in His Name.”  It is FAITH and BELIEF, not seeing, not proving, not doing ourselves, that will save us, day after day.  Two thousand years later, we are here (at Church, at Mass, at His Holy Eucharist) – only because of what other people have seen and said about Jesus.

You see, the truth is, that we really can’t save ourselves.  We really can’t keep ourselves from embarrassment.  Only Jesus can and will to that for us.  Look at St. Peter.  Thinking that he was saving himself, Peter found himself humiliated and embarrassed for denying his Lord (Mt 26:69-75).  And many years later, that same Peter was NOT embarrassed, but proud to be crucified – upside-down, for his faith in Jesus!

Do we ever think or do things that we know we shouldn’t, simply to discover that the only person who knows that we’re embarrassed, is ourselves?  That’s Jesus saving us!  Or are we ever embarrassed when someone cuts short their cursing, because WE are in the room?  That’s Jesus saving them, through us!  And that is one of the best signs of our faith.

You see, after those apostolic days had past, when people had first-hand experience of knowing Jesus and seeing His resurrection, the rest of the world had to rely on faith alone.  They had to believe what others had said, and couldn’t go back in time-or-place to “see” for themselves . . . with the exception of some very special cases.  For example . . .

In the mid-1930’s there was a young Polish Sister named Maria, who had several visions of Jesus.  In her visions, Jesus had described to Maria an image of Himself, which was to be painted and offered to the world for it’s healing.  Her contemporaries thought she was delusional.  They thought she was crazy.  In reality, she was a blessed mystic, like John of the Cross or Teresa of Avila.  And after she had died, at the early age of 33, Sr. Maria Faustina’s diary was placed on a list of forbidden books by the Church.

You see, Sr. Faustina had a vision of Jesus asking her to spread a message of mercy to the world.  It was the message that Jesus loves us so very much, that He shed His own Life’s blood to cleanse us of sin, to forgive us with His most Divine Mercy.  It was a message appealing to all of humanity to show that same mercy to one another.  Sr. Maria Faustina was so immersed in the Love of Jesus, she was so immersed in the Love of her neighbor, that all of their pain and all of their suffering pierced her very own heart. 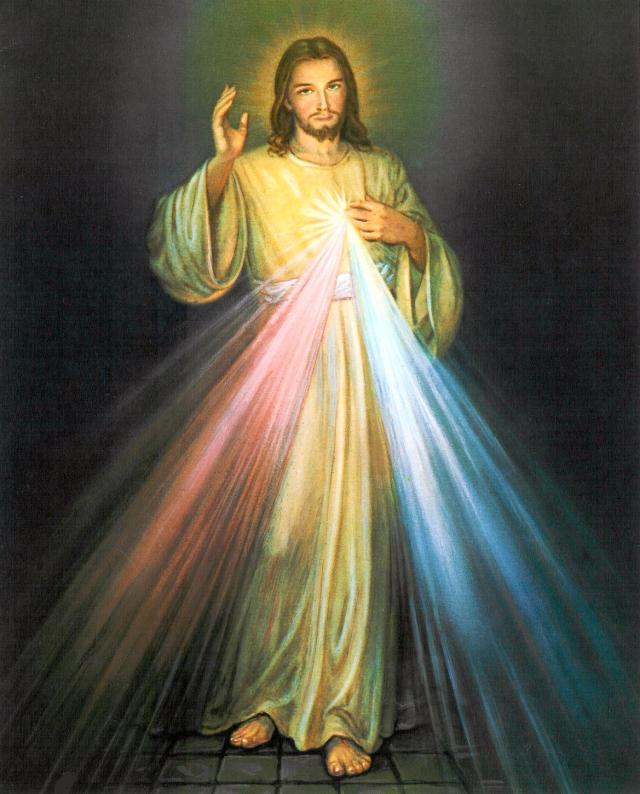 Jesus, I Trust in You

In the prayer, we call the Divine Mercy Chaplet, Sr. Faustina begs of God, “For the sake of His sorrowful passion, have mercy on us, and on the whole world.”  And in the inspired image of Jesus are rays of Blood and Water emanating from His pierced heart, with the caption, “Jesus, I Trust in You.”   You see, this was the Blood of sacrifice, the Blood of mercy and thanksgiving, the Gift of the Eucharist… And this was the Water of Baptism and New Life, the Birth of the Church, and the Gift of the Holy Spirit.  And it was all just a bit too extreme for the already overtaxed papacy to accept, in the midst of a second world war.

Then in the mid-1960s, the Archbishop of Krakow, Poland, Karol (Voy-tee-wah) Wojtyla, took up the cause for Sr. Maria’s canonization.  And on April 30, in the year 2000, Karol, then Pope John Paul II, canonized St. Faustina as the first saint of the new millennium.  At the same time, the Pope designated today, the Second Sunday of Easter, as “Divine Mercy Sunday.”  And, not coincidentally, it is the same day that Jesus instituted His merciful, Sacrament of Reconciliation, with the words: “Whose sins you forgive are forgiven them…” that we heard in today’s Gospel.

Then finally, to top the story off, it couldn’t be more fitting that on this very same day – TODAY, May 1st, 2011, only six years after his own death, Pope John Paul II becomes Blessed Pope John Paul II, in our recognition of his holiness.

As we unite ourselves with one another and with all the Saints and Angels in Heaven through the Blessed Sacrament today, there is no better proclamation of OUR Faith in Jesus, than the very words of Thomas himself – “My Lord and my God.”  And in receiving Him, we also thank Him for His most merciful Love of us.