Did you ever have “one of those days?”

I think Peter was having “one of those days.”

I remember one cold, North Jersey morning, when I had to force myself out of bed for school.  I purposely planned that first step to be on TOP of my socks – to avoid the cold, hard, linoleum floor.  But our puppy had other plans for my first step that day . . . when he used those socks as his middle-of-the-night fire hydrant.

So hopping my way to the bathroom, and stubbing my toe on the edge of the dresser, didn’t help brighten that day at all.  And when I finally made it to that ‘Haven of Relief,’ a warm, comfortable shower, the missing bar of soap and the short-lived, hot water supply convinced me that it was definitely going to be, “One of those days” . . .  One of those days that I should have just stayed in bed.

Ever have one of those days?

I think it was just that type of day that led Peter back to the Sea.  It was a tough day.  Peter knew that Jesus was back, and he couldn’t wait to see Him again.  But the guilt of what Peter had done weighed heavily on his mind.  And he knew that Jesus was well aware of his denial in the midst of all that torture.

Three times Peter had the chance to confirm his love for Jesus, but each denial was like another dagger in his own heart.  And, if he ever did see Jesus again, Peter wondered what he might say?

Would Jesus still love him?
The ‘not knowing’ was torture in itself. 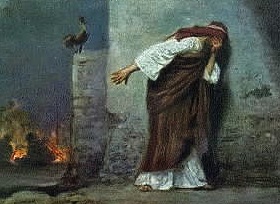 I remember waiting for my mom to come home with my new baby sister, when I was 7-years old.  It was a very difficult pregnancy and delivery, and my mom was very sick. But I didn’t know any of that.  And their return seemed to take forever.  So we waited, and waited, and impatiently waited.

It’s funny how Anxiety can wear us out,
without even lifting a finger.

I think it was the end of a long, dreadful day like this, that finally led Peter to decide to go fishing.  It was something he knew well.  It was his ‘Haven of Relief.’

Ever, want to just say: “I’m going fishing?”  When I was a kid they used to call it “Hookie.”  Today, we adults call it a “Mental health day.”

But it was just one of those endless, gloomy days for Peter, because after a whole night of trying, there wasn’t even a nibble of encouragement by a fish, to make it any better.

Ever have one of those days,
when you can’t even succeed
at doing – nothing?

And that’s when it happened . . .  Here, at the end of this long, dreary day and night; here was some guy asking Peter if he had caught anything.

And then he had the gall to imply that they were fishing on the wrong side.  But you know what, by now, Peter probably would have stood on his head to make a catch. So try he did . . .

And yet, that voice was so familiar.  John and Peter remembered that it was Jesus who said those same words, 3-years earlier . . . “Try it on the right side!”  And the catch they made now, was just as abundant as it was then.

Ever wonder what we would have done at the end of that long, hopeless day?  Would we have just shunned that stranger off?  “Leave us alone. Can’t you see we’re having a bad day here?”

Ever had a bad day, brothers and sisters, and notice that nobody even wants to come near us?  And yet our Salvation is right there before our very eyes.  Sometimes all we have to do is turn around and look on the other side.

Are our eyes, and our minds, and our hearts
open enough to find Jesus, even on a bad day?

You know, He’s always there.  Are we listening and doing what our minds might be telling us is irrational foolishness, when our hearts should really be rejoicing at a command from our Lord?

Though the disciples may not have recognized Him at first, Jesus was there!  And this is exactly what Peter had been waiting for, and was so anxious about, ALL day long.  He was so excited, so at the edge of his rope, that he didn’t even think of his friends, or all those fish that needed to be hauled in.  He went right at it: Getting to his Jesus.  And nothing could stop him.

Ever get so excited that the world goes blank, except for that focal-point of ours?  Jesus wants our lives to be just like that, Excited and Focused.

Jesus wants to BE our focal point.

And yet, we might still be asking ourselves, “But where is Jesus in MY life?”  Maybe we’ve been waiting and waiting and wondering if He still loves us, too.

When we can keep our focus on Jesus and not on the fish, nor on the missing fish in our lives, Jesus will feed us, Jesus will free us, and Jesus will smooth out those rough days.

You see, the love of Jesus and the Holy Spirit changed Peter enough to dissolve away all of his guilt.  They changed Peter enough to boldly challenge the very same high priest who condemned Jesus to death.  And they can change us enough to never again have “one of those days” when we don’t even want to get up . . .  Because every challenge will be just another chance to confirm our faith, and our love for Jesus.  And every roadblock will be just another little hurdle that Jesus and we can overcome in order to grow closer together.

Today, as we come rejoicing to His breakfast Table, for this feast of Eternal Life, Jesus asks each and every one of us here, that same life-transforming question that He asked Peter:

Scripture Readings for the Mass of 04-10-16
Third Sunday of Easter, C

When the captain and the court officers had brought the apostles in and made them stand before the Sanhedrin, the high priest questioned them, “We gave you strict orders, did we not, to stop teaching in that name? Yet you have filled Jerusalem with your teaching and want to bring this man’s blood upon us.”

But Peter and the apostles said in reply, “We must obey God rather than men. The God of our ancestors raised Jesus, though you had him killed by hanging him on a tree. God exalted him at his right hand as leader and savior to grant Israel repentance and forgiveness of sins. We are witnesses of these things, as is the Holy Spirit whom God has given to those who obey him.”

The Sanhedrin ordered the apostles to stop speaking in the name of Jesus, and dismissed them. So they left the presence of the Sanhedrin, rejoicing that they had been found worthy to suffer dishonor for the sake of the name.

I, John, looked and heard the voices of many angels who surrounded the throne and the living creatures and the elders. They were countless in number, and they cried out in a loud voice: “Worthy is the Lamb that was slain to receive power and riches, wisdom and strength, honor and glory and blessing.”

Then I heard every creature in heaven and on earth and under the earth and in the sea, everything in the universe, cry out: “To the one who sits on the throne and to the Lamb be blessing and honor, glory and might, forever and ever.”

The four living creatures answered, “Amen,” and the elders fell down and worshiped.

Simon Peter said to them, “I am going fishing.”  They said to him, “We also will come with you.”  So they went out and got into the boat, but that night they caught nothing. When it was already dawn, Jesus was standing on the shore; but the disciples did not realize that it was Jesus.

Jesus said to them, “Children, have you caught anything to eat?”  They answered him, “No.”  So he said to them, “Cast the net over the right side of the boat and you will find something.”  So they cast it, and were not able to pull it in because of the number of fish.

So the disciple whom Jesus loved said to Peter, “It is the Lord.” When Simon Peter heard that it was the Lord, he tucked in his garment, for he was lightly clad, and jumped into the sea.  The other disciples came in the boat, for they were not far from shore, only about a hundred yards, dragging the net with the fish.

When they climbed out on shore, they saw a charcoal fire with fish on it and bread. Jesus said to them, “Bring some of the fish you just caught.” So Simon Peter went over and dragged the net ashore full of one hundred fifty-three large fish.  Even though there were so many, the net was not torn.

Jesus said to them, “Come, have breakfast.”  And none of the disciples dared to ask him, “Who are you?” because they realized it was the Lord.

Jesus came over and took the bread and gave it to them, and in like manner the fish.  This was now the third time Jesus was revealed to his disciples after being raised from the dead.

When they had finished breakfast, Jesus said to Simon Peter, “Simon, son of John, do you love me more than these?”  Simon Peter answered him, “Yes, Lord, you know that I love you.”  Jesus said to him, “Feed my lambs.”

He then said to Simon Peter a second time, “Simon, son of John, do you love me?”  Simon Peter answered him, “Yes, Lord, you know that I love you.”  Jesus said to him, “Tend my sheep.”

Jesus said to him, “Feed my sheep. Amen, amen, I say to you, when you were younger, you used to dress yourself and go where you wanted; but when you grow old, you will stretch out your hands, and someone else will dress you and lead you where you do not want to go.”  He said this signifying by what kind of death he would glorify God.  And when he had said this, he said to him, “Follow me.”