Whenever something truly important happens in the world or in our own personal lives, there are usually a lot of words we can use to describe that event, because it fills our emotions, and our thoughts, and even our senses.

Can you just imagine the trauma, the fear, the excitement, the wonder and the awe that Mary and Joseph had gone through in those past eleven months?  From the angel’s Annunciations to both of them, to the miraculous pregnancies of young Mary and old Elizabeth; Mary and Joseph’s long and rough journey to Bethlehem; having a baby in an animal’s stable; the shepherd’s incredible vision of a Host of Angels; and now this old man and woman, Simeon and Anna, seemingly knowing the whole story, and more!!  It might be easy for us to look back, knowing the end of the story.  But just imagine going through it ourselves!

Every little aspect of that Journey is powerfully emotional, painful,  joyful and even symbolic.

Today we remember and we celebrate four important events from that Journey. And some of the words that have been used to describe those events are things like:

Pretty big words.
Yet, these words not only described the events in Jesus, Mary and Joseph’s lives, but we see them in our own lives as well.  So let’s take a look at each of them in the context of today’s Gospel reading . . .

In each case, that Purification involved some kind of Sacrifice on the part of the person being purified.  And because our loving God, so mercifully allows us to BE purified, we in turn, offer a Sacrifice back to Him, just as Mary did, with turtledoves or pigeons, which was the traditional offering given by the poor.

And if we were to extend that idea just a little further in time, we can also see it in Jesus’ Purification of our sinful human nature by becoming one of us, which was followed by His Sacrificial Offering back to God with His own life.

It’s enough to take your breath away!

The second aspect of today’s Celebration is called: the Feast of the Presentation of the Lord, because after the mother had completed the 40-days of Purification, she and her husband had the responsibility, according to the Jewish tradition, of Presenting their first-born son, of Consecrating or Dedicating him to God, in the Temple.  But rather than leaving the boy in the hands of the Priest, as Hannah did, with her first-born son, Samuel, Mary was able to buy back or Redeem her son, Jesus, at the time of His Presentation, with a 5-sheckel payment to the Temple Priest.

For, you see, Simeon, whose very name means “he heard,” was so dedicated to God, that he did hear and recognize the voice of the Holy Spirit, Revealing to him – exactly who the promised Messiah was.

And when Jesus, that King of Glory, finally appeared to Simeon and Anna’s  own eyes, they just could not hold back the Joy in their hearts.  So they Revealed His presence,  not only to Mary and Joseph, but to the whole world, by calling him: a “Light for Revelation to the Gentiles and a Glory for God’s people, Israel.“

Yet, Simeon didn’t stop at the Blessing, without giving Mary a prophesy also.  It was a prophesy and a reminder that: all Purifications come with a Sacrifice.  And the Sacrifice required to Purify our human nature and Redeem us to God, would prove to be very painful, and especially to Mary.

And that pain would not stop at Mary either, because in order for us to accept our Redemption, in many ways, we have to go: against human nature, against the flow of the crowd, against the flow of the world, and become that same Contradiction that Jesus represented.  The Contradiction that: “Love pointed inward is NOT the same as Love pointed outward.”

And you know what, brothers and sisters in Christ, some day we might even have to die in our Love for Jesus, in order to gain true Life with God, just as the martyr, St. Blaise did, because he knew that saving souls was well worth that cost – the Purifying Sacrifice of Redemption . . .

Which brings us to the fourth and final aspect of today’s Celebration.  Although tomorrow is the actual Feast day of St. Blaise, we commemorate St. Blaise today with the Blessing of Throats, which is based on a Healing that this holy and wise – doctor, bishop and martyr from Armenia, performed on a young child in the early 300’s.  Then in repayment for the healing, the child’s mother gave St. Blaise some food and Candles, so that he could read the Scriptures – while he was awaiting his death sentence in prison. 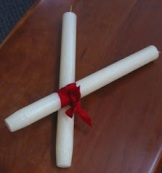 And so it is, that today we use Two White Candles to represent the Purity of Jesus.

They’re held in the Form of a Cross to represent His Sacrifice.

Whenever something truly important happens in our lives,
there are usually lots of words that we can use to describe it.

And yet, only ONE Word stands out above all the others.

Thus says the Lord God: Lo, I am sending my messenger to prepare the way before me; And suddenly there will come to the temple the LORD whom you seek, And the messenger of the covenant whom you desire.

Yes, he is coming, says the LORD of hosts. But who will endure the day of his coming? And who can stand when he appears?

For he is like the refiner’s fire, or like the fuller’s lye. He will sit refining and purifying silver, and he will purify the sons of Levi, Refining them like gold or like silver that they may offer due sacrifice to the LORD.

Then the sacrifice of Judah and Jerusalem will please the LORD, as in the days of old, as in years gone by.

Since the children share in blood and flesh, Jesus likewise shared in them, that through death he might destroy the one who has the power of death, that is, the Devil, and free those who through fear of death had been subject to slavery all their life.

Surely he did not help angels but rather the descendants of Abraham; therefore, he had to become like his brothers and sisters in every way, that he might be a merciful and faithful high priest before God to expiate the sins of the people.

Because he himself was tested through what he suffered, he is able to help those who are being tested.

Now there was a man in Jerusalem whose name was Simeon. This man was righteous and devout, awaiting the consolation of Israel, and the Holy Spirit was upon him.  It had been revealed to him by the Holy Spirit that he should not see death before he had seen the Christ of the Lord.

He came in the Spirit into the temple; and when the parents brought in the child Jesus to perform the custom of the law in regard to him, he took him into his arms and blessed God, saying: “Now, Master, you may let your servant go in peace, according to your word, for my eyes have seen your salvation, which you prepared in the sight of all the peoples: a light for revelation to the Gentiles, and glory for your people Israel.”

The child’s father and mother were amazed at what was said about him; and Simeon blessed them and said to Mary his mother, “Behold, this child is destined for the fall and rise of many in Israel, and to be a sign that will be contradicted —and you yourself a sword will pierce— so that the thoughts of many hearts may be revealed.”

There was also a prophetess, Anna, the daughter of Phanuel, of the tribe of Asher.  She was advanced in years, having lived seven years with her husband after her marriage, and then as a widow until she was eighty-four.  She never left the temple, but worshiped night and day with fasting and prayer. And coming forward at that very time, she gave thanks to God and spoke about the child to all who were awaiting the redemption of Jerusalem.

When they had fulfilled all the prescriptions of the law of the Lord, they returned to Galilee, to their own town of Nazareth.  The child grew and became strong, filled with wisdom; and the favor of God was upon him.