The Birth of Mary – the Mother of God

For those who may have wondered where the stories of Mary’s birth came from,
here is an excerpt from an early writing…

The Gospel of the Birth of Mary

The principal part of this Gospel is contained in the Protoevangelium of James.
Excerpt from: The Lost Books of the Bible, LB Press
(This is an apocryphal, not canonical work)

THE blessed and ever glorious Virgin Mary, sprung from the royal race and family of David, was born in the city of Nazareth, and educated at Jerusalem, in the temple of the Lord.  Her father’s name was Joachim, and her mother’s Anna. The family of her father was of Galilee and the city of Nazareth. The family of her mother was of Bethlehem.  Their lives were plain and right in the sight of the Lord, pious and faultless before men. For they divided all their substance into three parts:  One of which they devoted to the temple and officers of the temple; another they distributed among strangers, and persons in poor circumstances; and the third they reserved for themselves and the uses of their own family.

In this manner they lived for about twenty years chastely, in the favour of God, and the esteem of men, without any children.  But they vowed, if God should favour them with any issue, they would devote it to the service of the Lord; on which account they went at every feast in the year to the temple of the Lord.

And it came to pass, that when the feast of the dedication drew near, Joachim, with some others of his tribe, went up to Jerusalem, and at that time, Issachar was high-priest;  Who, when he saw Joachim along with the rest of his neighbours, bringing his offering, despised both him and his offerings, and asked him, Why he, who had no children, would presume to appear among those who had? Adding, that his offerings could never be acceptable to God, who was judged by him unworthy to have children; the Scripture having said, Cursed is every one who shall not beget a male in Israel.  He further said, that he ought first to be free from that curse by begetting some issue, and then come with his offerings into the presence of God.

But Joachim being much confounded with the shame of such reproach, retired to the shepherds, who were with the cattle in their pastures; For he was not inclined to return home, lest his neighbours, who were present and heard all this from the high-priest, should publicly reproach him in the same manner. 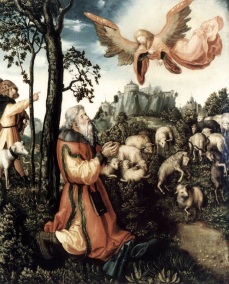 BUT when he had been there for some time, on a certain day when he was alone, the angel of the Lord stood by him with a prodigious light.  To whom, being troubled at the appearance, the angel who had appeared to him, endeavouring to compose him said:  Be not afraid, Joachim, nor troubled at the sight of me, for I am an angel of the Lord sent by him to you, that I might inform you, that your prayers are heard, and your alms ascended in the sight of God.  For he hath surely seen your shame, and heard you unjustly reproached for not having children: for God is the avenger of sin, and not of nature;  And so when he shuts the womb of any person, he does it for this reason, that he may in a more wonderful manner again open it, and that which is born appear to be not the product of lust, but the gift of God.  For the first mother of your nation Sarah, was she not barren even till her eightieth year: And yet even in the end of her old age brought forth Isaac, in whom the promise was made a blessing to all nations.  Rachel also, so much in favour with God, and beloved so much by holy Jacob, continued barren for a long time, yet afterwards was the mother of Joseph, who was not only governor of Egypt, but delivered many nations from perishing with hunger.  Who among the judges was more valiant than Samson, or more holy than Samuel? And yet both their mothers were barren.

But if reason will not convince you of the truth of my words, that there are frequent conceptions in advanced years, and that those who were barren have brought forth to their great surprise; therefore Anna your wife shall bring you a daughter, and you shall call her name Mary;  She shall, according to your vow, be devoted to the Lord from her infancy, and be filled with the Holy Ghost from her mother’s womb;  She shall neither eat nor drink anything which is unclean, nor shall her conversation be without among the common people, but in the temple of the Lord; that so she may not fall under any slander or suspicion of what is bad.

So in the process of her years, as she shall be in a miraculous manner born of one that was barren, so she shall, while yet a virgin, in a way unparalleled, bring forth the Son of the most High God, who shall, be called Jesus, and, according to the signification of his name, be the Saviour of all nations.  And this shall be a sign to you of the things which I declare, namely, when you come to the golden gate of Jerusalem, you shall there meet your wife Anna, who being very much troubled that you returned no sooner, shall then rejoice to see you.  When the angel had said this he departed from him. 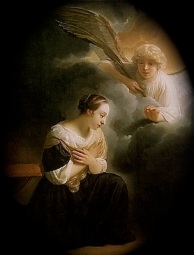 AFTERWARDS the angel appeared to Anna his wife saying: Fear not, neither think that which you see is a spirit.  For I am that angel who hath offered up your prayers and alms before God, and am now sent to you, that I may inform you, that a daughter will be born unto you, who shall be called Mary, and shall be blessed above all women.  She shall be, immediately upon her birth, full of the grace of the Lord, and shall continue during the three years of her weaning in her father’s house, and afterwards, being devoted to the service of the Lord, shall not depart from the temple, till she arrives to years of discretion.  In a word, she shall there serve the Lord night and day in fasting and prayer, shall abstain from every unclean thing, and never know any man;  But, being an unparalleled instance without any pollution or defilement, and a virgin not knowing any man, shall bring forth a son, and a maid shall bring forth the Lord, who both by his grace and name and works, shall be the Saviour of the world. 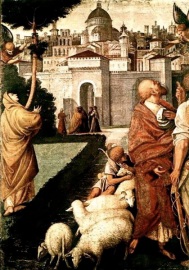 Arise therefore, and go up to Jerusalem, and when you shall come to that which is called the golden gate (because it is gilt with gold), as a sign of what I have told you, you shall meet your husband, for whose safety you have been so much concerned.  When therefore you find these things thus accomplished, believe that all the rest which I have told you, shall also undoubtedly be accomplished.

According therefore to the command of the angel, both of them left the places where they were, and when they came to the place specified in the angel’s prediction, they met each other.  Then, rejoicing at each other’s vision, and being fully satisfied in the promise of a child, they gave due thanks to the Lord, who exalts the humble.  After having praised the Lord, they returned home, and lived in a cheerful and assured expectation of the promise of God. 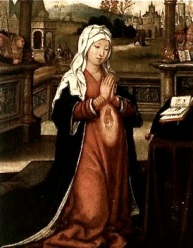 So Anna conceived, and brought forth a daughter, and, according to the angel’s command, the parents did call her name Mary.

AND when three years were expired, and the time of her weaning complete, they brought the Virgin to the temple of the Lord with offerings.  And there were about the temple, according to the fifteen Psalms of degrees, fifteen stairs to ascend.  For the temple being built in a mountain, the altar of burnt-offering, which was without, could not be come near but by stairs;  The parents of the blessed Virgin and infant Mary put her upon one of these stairs;  But while they were putting off their clothes, in which they had travelled, and according to custom putting on some that were more neat and clean,  In the mean time the Virgin of the Lord in such a manner went up all the stairs one after another, without the help of any to lead or lift her, that any one would have judged from hence that she was of perfect age. 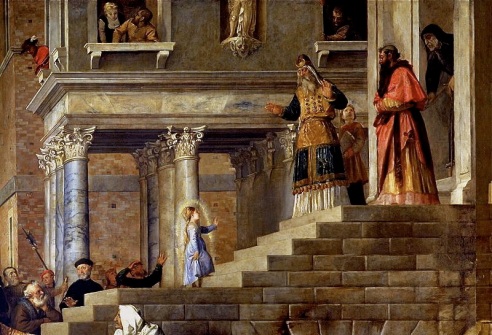 Thus the Lord did, in the infancy of his Virgin, work this extraordinary work, and evidence by this miracle how great she was like to be hereafter.  But the parents having offered up their sacrifice, according to the custom of the law, and perfected their vow, left the Virgin with other virgins in the apartments of the temple, who were to be brought up there, and they returned home.

Thank you Anna and Joachim for your Faith.

Thank you Mary, for your “Yes.”

Praise to you Lord, Jesus Christ !!!

Hello and welcome to ColorMe4Life and Whispers to the Wind. My name is Joe Puglis and these websites encompass various aspects of my life. From the backgrounds of grocery store proprietor, to research chemist, to manager, carpet dyer and Catholic deacon you'll find a cornucopia of colors here, the Colors of Life. Most dear to my heart is my love of God, my awesome family, and you, beloved. Thank you for visiting. Please come back again. And feel free to visit the links in all pictures and hyper-linked words. These are always hand selected to go with the topic of discussion and kept as absolutely clean as possible. Also, I apologize for any links that have been removed by their owners. In time I try to replace them or update them. Hope you enjoy. May God bless YOU always, in Christ's love! Joe
View all posts by Joe Puglis →
This entry was posted in The Lord\'s Page and tagged Anna, Apocrypha, Birth of Mary, Immaculate Conception, Jesus Christ, Joakim, Nativity of the Blessed Virgin Mary, Virgin Mary. Bookmark the permalink.